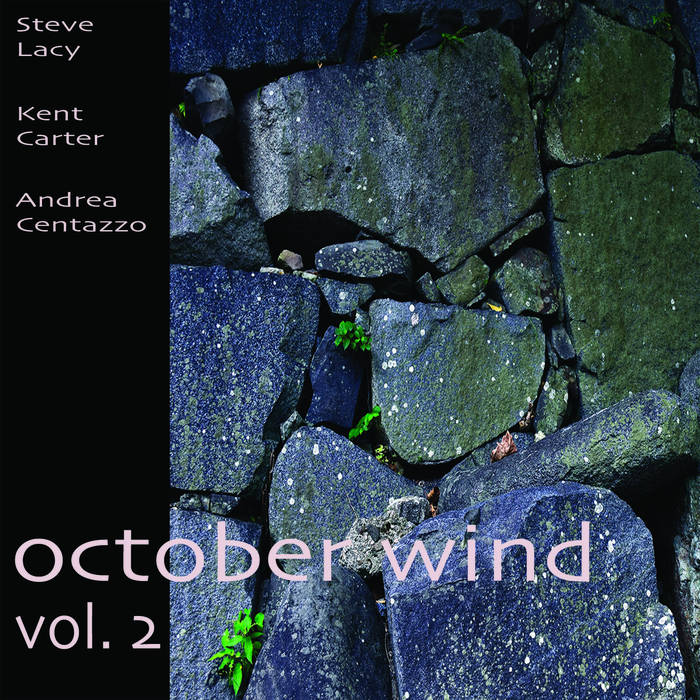 The release of the two volumes of October Wind, on the tenth anniversary of Steve Lacy death, has
a special meaning for me. Not only because it’s probably the last unreleased recording of this extraordinary trio, but also because I was working on it with my dearest friend Gilles Laheurte, who had been one of the best friend of the late Steve Lacy.
Gilles was a scholar of Steve Lacy music and I had the privilege to have his liner notes on the previous re-discovered trio recording released as Lost in June (ICTUS 161) and on some of the other ICTUS CD’s.

Gilles passed away last May while we were working on this CD project....
I met Gilles late in my life but it has been like we knew each other since birth....
I was so lucky to spend an entire week with him in April and leave NY the day he entered in the hospital.
I will never forget the joy and the love of those days.
That week he sent me the preliminary notes for the CD’s we were releasing.
The following email contains his words as usual sharp, precise and illuminating.

The two volumes of October Wind are dedicated to Gilles, one of the greatest man I
encountered in my life.

Hi Andrea, so good to have spent some time with you today @ Cafe 28! I was really happy to share your stories... about Steve, your music and Japan... You have some intriguing things on your plate ... !!!!
Tomorrow evening Saturday is the best time for a dinner together; we do not know yet whether here or in a restaurant, we'll decide later tonight what to do, shall let you know.

With reference to the double CD of you, Steve + Kent in Milano / Nov. 1975.
As mentioned I found the recording quality to be OK but kind of murky at times, and there are moments where one can hear some people talking (which I found annoying…).
Other than that, this is DYNAMITE stuff! Steve is full of energy and inventions... We have here a slow
pace / unusual BLINKS , a rare version of FELINE, a daring WEAL, a very surprising rendition of
FLAKES and a splendid version of STALKS, not forgetting the always gripping TAO suite ...
Regretfully I found that one cannot always hear you that well / clearly, and it is also at times a
problem for Kent's bass... but WOW, what a concert it was !!!!!!!!!!! Impossible to remain
indifferent to that kind of explosive stuff !!!!
Now time for my special carrot routine with coconut oil and apple cider vinegar , etc etc....
And the beat (of life) goes on and the beat goes on and the beat goes on .... ...
A domani !!!!!!
Gilles